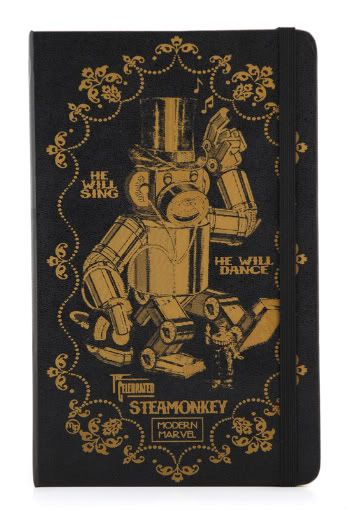 The good folks over at Modofly have included my antiquated little "Steamonkey" in their latest series of designer Moleskines. I am delighted. Looking over the work of my fellow designers, I must say I am humbled as well. Be sure to check out the Modofly site for a slew of beautimous books (sure to satisfy all your gift-giving needs, ho ho!).

The Family Monkey
by Russell Edson

We bought an electric monkey, experimenting rather
recklessly with funds carefully gathered since
grandfather's time for the purchase of a steam monkey.

We had either, by this time, the choice of an electric
or gas monkey.

The steam monkey is no longer being made, said the monkey
merchant.

But the family always planned on a steam monkey.

Is that like the grandfather clock being replaced by the
grandchild clock?

Sort of, said the monkey merchant.

So we bought the electric monkey, and plugged its umbilical
cord into the wall.

The smoke coming out of its fur told us something was wrong.

We had electrocuted the family monkey.

Above is the full-color source image (reworked from an older piece I did whilst under the mentorship of David Ball).
Subscribe
Comments for this post were disabled by the author