I've been keeping a haphazard dream diary over the past year, sketching out various scenarios as they occur to me. Occasionally I get a nice, vivid one handed to me on a platter of snowflakes and gummi bears.

Minus a minor color adjustment on the robot, this tableau is pretty near exactly what I saw in my sleep a few months back. A novel change of scenery from the apocalyptic, loose nuke dreams I usually get.

Q: What does it all mean?
A: Clearly, Skynet is rapidly approaching self-awareness, and Batman & Robin shall be powerless to save us from it. All hail Chrom, Robot Lord of Cyberia!

I actually sort of think this would fit in nicely with some of the stories in the new Chip Kidd/Jiro Kuwata (yes, him too; spare me the blog-o-drama) BAT-MANGA! book. There are a few other things in its pages that really set off my dream-diving spidey senses, but I'll save them for another post...

For now, though, enjoy a few of these haunted objects from my wundershelves:

A Mazinger Z(?) figure dug up from the ground near my dad's toolshed. Presumably discarded by the previous landowners, its Cthuloidal encroachment upon my dreams nonetheless speaks of vast-y eldritch terrors, aeons-ancient, drenched in dread...

A Batmobile model kit (produced at right about the same time as the original Bat-Manga stories, if I'm not mistaken). I purchased it at my first-ever comic book "convention" (which was actually a rather meager, card-table and folding-chair affair over at the local Hills shopping mall). Not too terribly menacing. 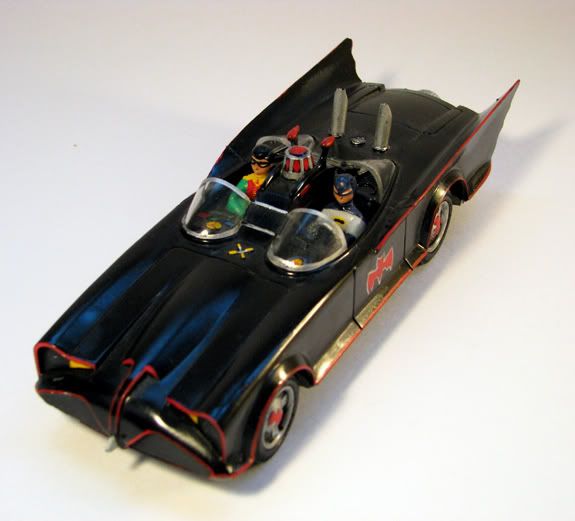 Roger, ready to move out!!!